Knowing its election time is easy in Malta! There is no local TV station, no street, no social media network, no letterbox, no cell phone, in poor words nobody is "safe" to be left alone.

Sometimes I wonder if being bombarded for 3 months in such a brute way has a positive or negative effect on us common people. I, to begin with, am already in a situation of shutting down most of the efforts of the political parties. I am not a person that lives street parties, so not interested in mass meetings, don't really appreciate junk mail, so the piles of leaflets I receive end directly in the recycle bin and honestly if I am watching TV I hate people commenting during a program, like the lot arguing on Facebook who's wrong or who's right whilst ignoring the essence of the talks themselves.

Maybe I am boring, but I guess this nation should grow more when it comes to politics. Having two main parties, we are automatically dragged in being A against B or better blue against red and vice versa. Just imagine if green had as much power - would it make a difference? Imagine there was a yellow too - now that would make a greater difference! The importance would be divided and ultimately focused - focused on the well being of the nation and its people.

Sometimes when I hear 'common' people talking politics, it's impressive how personal people talk, how knowledgable they suddenly become, talking about finances, engineering projects, energy infrastructure etc - and I can't help but notice that a lot of these people do not have the expertise in these fields. They just parrot talk anything their favourite party says and defend it dearly. There is absolutely nothing bad to defend one's ideals, but before making a fuss and accuse others that they are wrong and you are right (your party is right I mean), did you take a minute to analyse all that you hear or read on the news (or from a friend at a bar)? Maybe a distinction from politics to parties and football should be clearly made for some.

The one thing that strikes me most is the fact that the promo materials of both parties are not about what each party will be doing or proposing, but why one shouldn't vote the other! TV clips that even the music puts you in a negative vibe accompanied by a storyline fit of horror movie. Again been there seen that and if I feel that way I guess a lot more feel the same way, or else I might be mad or living on another island.

I tried to follow a bit of what is happening at the moment and the thing which baffles me is the ability of each party to disagree and possibly 'destroy' or ridicule each others ideas or opinions. Simply imagine if they told each other "we do like your idea and we want to add this and it comes better!" Yes SIMPLY IMAGINE - and only imagining we will, as guess that would never happen!!

Posted by WilCam at 3:12 PM No comments:

They say it only happens in India, but it Happens in Malta too!

Yesterday I was driving up towards the rabat area and this scene came in front of me...... 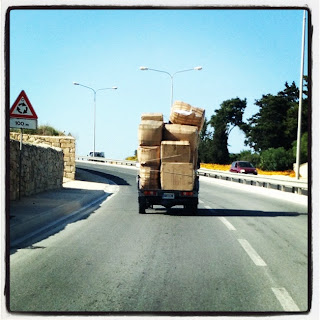 ..... I immediately felt like being back in Rajasthan, seeing the over loaded vans, motorbikes, rickshaws, animals & people - then it dawn on me I was in Malta! And I must say the guy has guts and he really managed great in the balancing act!

Well I had to take a photo and share with you and I must say, was a great laugh (as long as the load doesn't topple over!)
Posted by WilCam at 7:04 AM No comments:

Storm or no Storm

After the, we must say, quite devastating storm of September 2nd, the Met office put everyone on the alert for the coming weekend. Another storm surge is coming. Well yesterday we didn't see a drop of rain, but early morning it did drizzle a bit and its at it again now whilst I am writing.

The most worrying report was one seen on an Italian weather site, which explained the storm as a cyclone hitting the Mediterranean - well lets hope for the best and hope we don't have more scenes like those seen at the beginning of this month.

I have been wanting to start a blog for quite sometime now to voice my opinion about Malta and situations which arise in our small archipelago, but I always seemed to postpone it, but after yesterday's evening and the passing of Malta's most prominent, controversial and known political figure, I thought it was time to start. Strangely what inspired it was the death of a personality.... a great personality.

Yes, Dom Mintoff passed away and for Malta it's a big deal for many different reasons. As always and like everywhere in the world we do have different ideas and opinions, but sometimes I tend to see that splits on the island are more easy to see. Some reactions are of "loosing a father" some are "a tyrant finally is gone".

I didn't know the Dom personally and I was too young to remember well his legislation, but the thing I know is that his was the first name I learnt in relation to Maltese politics. As I grew older and heard all the different versions about this personality, the only thing that struck me was how strong and maybe can I say 'hard headed', this person was. I remember when in 1998 he voted against Sant's government and he showed to the Maltese what it truly means to have the balls and if you believe in something you go ahead and voice it and do it. We can argue for ages that sometimes the thing you believe can also be wrong, but this is not the issue here - the issue is of being man enough to show your colours and if something you see it white you say it if you see it black you say it too!

I do sense a lot of irony in a lot of the statements, there is also harsh hatred, some too much grief & show and at least some Honest respect.

I feel this person gave our island a lot. A lot of knowledge and a lot to learn from. If there were things that were wrong we should stop the grudge and the justifications and learn from these experiences and we should highlight the good & make it a base to build upon and improve on.

For me personally this person gave me one main inspiration - not to be afraid to have a voice and say what I feel is right, but also teaches me to listen more and get my facts right, then I can build more on what I believe in, not for a personal good but for a common one.

Posted by WilCam at 5:13 AM No comments: